Thorin Oakenshield. The Battle of Five Arms, The Hobbit

This report saw Sam And I travelling to see Rick.  Sam took team Ravenhill, which comprised of Thorin, Kili, Fili, Tauriel and Bilbo.  I took Sauron and Rick took Gandalf the Grey, some Woses with Ghan buri Ghan and Haldir with some Galadhrim - 450 points each.

The Frodo was placed in the middle and each army started on their own token.  The points were 3 points for holding an enemy token, -1 for any of your own troops within 6 inches and kill points for generals. The game would end at a certain time, unless there was a clear victor.

The terrain was placed and the armies deployed... let battle commence!

Man of the Match 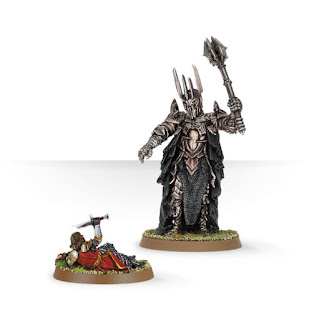 This was an easy choice, Sauron being the last man standing.  However he did stand up to everything that was thrown at him (well what was left!). I wanted to get stuck into the heart of battle, but got side tracked with the woses running around the woods.

Sauron is a beast - he has brilliant stats, and as he was wearing the One Ring, if he was killed I could re-roll to come back to life and continue with one wound!   I knew it would be tough facing Sams hero team as they had lots of might to strike up their fight value, win the fight and keep me from damaging them.

I guess my tactic paid off, let Sam and Rick fight it out and I would come in and mop up!

An expensive, but solid Sauron claims man of the match.


We welcome anyone interested in playing The Hobbit SBG, Lotr SBG, WotR or any Warhammer/40K, X-Wing battle or table-top war game - why not let us know so that we can arrange some starter battles,

Feel free to come along to Midsussexwargaming or arrange a game.
Posted by Leonardis at 15:00