"One does not simply walk into Mordor.
Its Black Gates are guarded by more than just Orcs. There is evil there that does not sleep, and the Great Eye is ever watchful. It is a barren wasteland, riddled with fire and ash and dust, the very air you breathe is a poisonous fume. Not with ten thousand men could you do this. It is folly. ."

Boromir, The Fellowship of the Ring, The Lord of The Rings


Gondor v Angmar v Durins Folk
Some time at the end of last year, Sam, Rick and I got together to have a battle.  It ended up a three way battle, I took my monster Angmar army, led by the Witch king, with a Cave Drake, Buhrdur, Shade and some cave trolls.

The objective a hill in the centre of the battlefield - 1 point per figure within 6 inches.

Who will win the battle.... 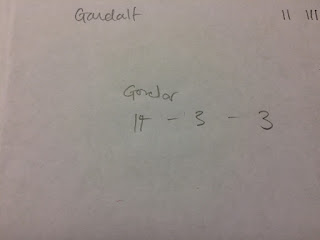 Well done Rick... he remembered the objective and played the game well, we soaked up his soft troops, broke him and handed him the game.

The second half was really just Angmar v Durins Folk, but this just showed how hardy they are, the slowly beat the monsters down and used their numbers and high defence to be an unstoppable army.

A good game of two halves.
Man of the Match

This was quite clear, Gimli son of Gloin was a beast in this battle, he smashed through the woses, Gondorians, killed the cave drake and really made it a slog to try to stand up against him....
So for this fight, Gimli simply has to be the man of the match.


We welcome anyone interested in playing The Hobbit SBG, Lotr SBG, WotR or any Warhammer/40K, X-Wing battle or table-top war game - why not let us know so that we can arrange some starter battles,

Feel free to come along to Midsussexwargaming or arrange a game.
Posted by Leonardis at 11:46