As part of the Mid Sussex Wargaming clubs ongoing Lord of the Rings campaign my Harad army in West Harondor is under attack from James’s army moving south from Osgiliath. My Harad forces have been making significant inroads into Gondor’s lands and this battle is part of the Gondorian fight back. 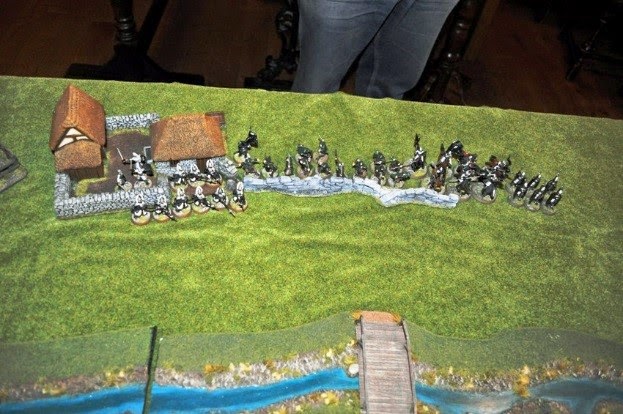 We faced each other across a small stream, which is difficult terrain for infantry, but has no effect on cavalry or monstrous mounts. He had a farmstead and field his side of the stream and I had a small hill my side of the stream. He set up behind his walls. His force consisted of King Ellesar leading six Knights of Minas Tirith, one with a banner, on my right flank. This was supported by six Citadel Guards. In the centre he had Damrod with twelve Rangers with spears as well as bows. On my left flank he had ten Guards of the Fountain Court and two Warriors of Minas Tirith, led by a Captain.
I set up with a Mumakil in the centre with twelve Warriors of Karna with bows in the Howdah. On my left flank I placed my leader, a Hasharin with one Half Troll, two Castellans of Umbar, three Watchers of Karna and five Haradrim Warriors with spear.
On my right I set up an Haradrim Chieftain leading one Half Troll, one Castellans of Umbar, five Watchers of Karna and four Haradrim Warriors with spear. This was supported by a Taskmaster with six Mahud warriors with spear, four Serpent Riders and two Mahud camel Raiders. 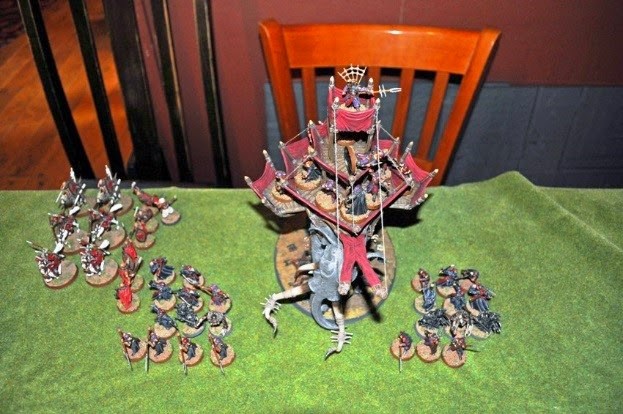 James sent King Ellesar wide to my right flank with his Guard of the Fountain Court moving wide to my left flank. 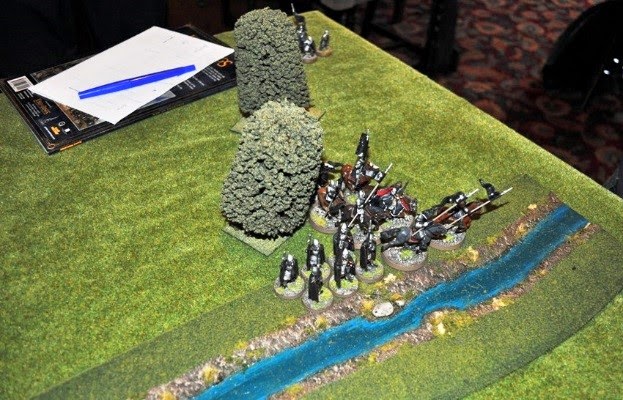 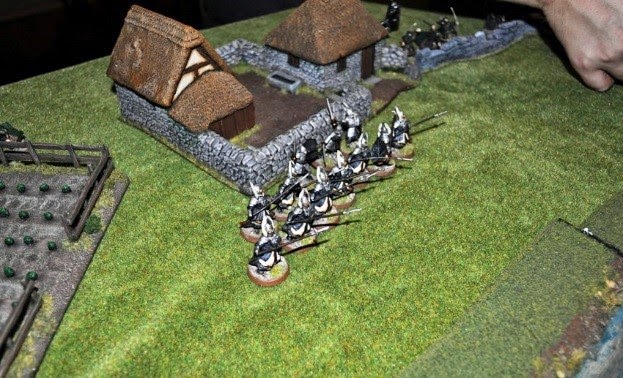 His rangers advanced in the centre. I made the decision to try to hold up King Ellesar while moving to attack the Guard of the Fountain Court. So I sent my cavalry off to intercept King Ellesar, who was using his free Might a turn to Heroic March. 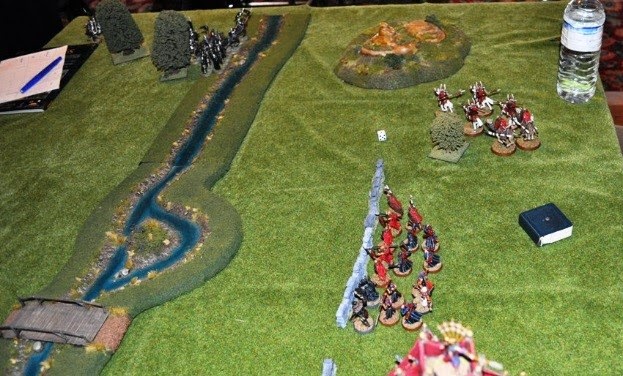 As I suspected this was only partially successful, I managed to cut down two horses and one Knight, but then King Ellesar and the remainder of the Knights very quickly destroyed most of my cavalry. Although it took up a good portion of King Ellesar’s Might to do it. He had to Heroic Move and Heroic Fight. 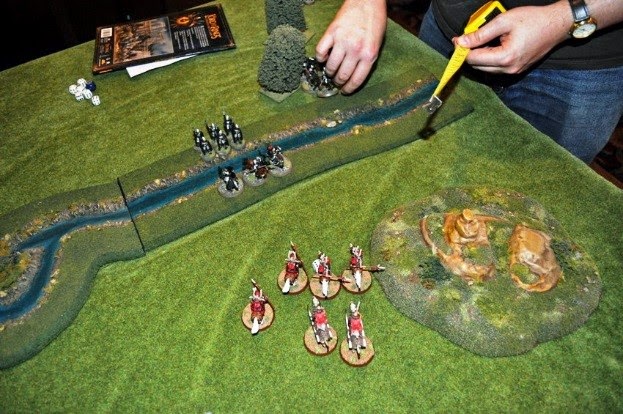 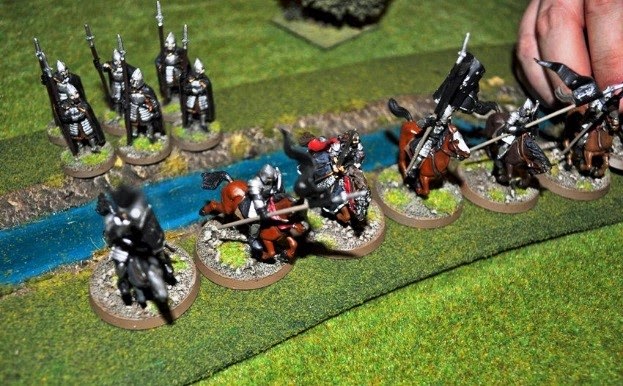 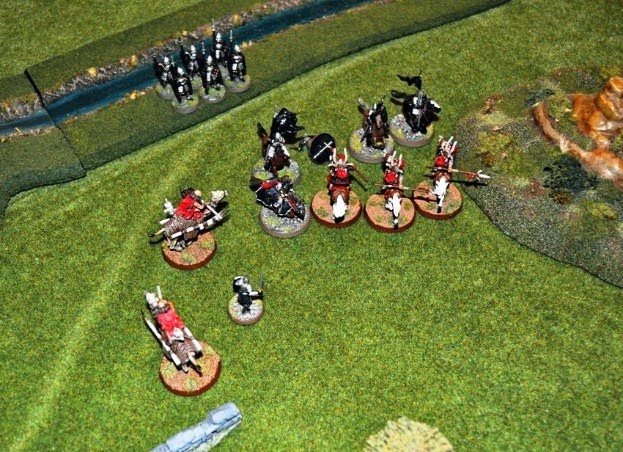 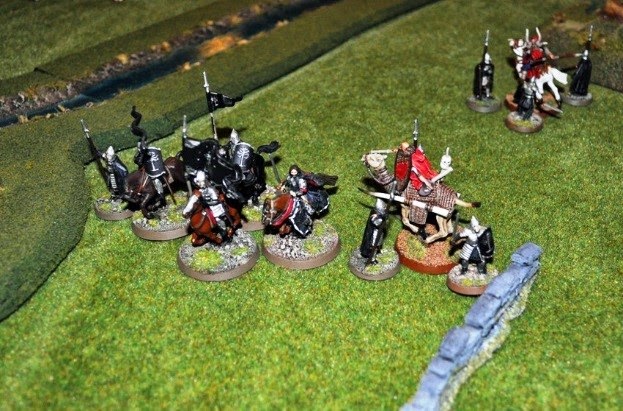 In the centre I had some early success with my bowmen, killing five Rangers. But, then the dice turned against me, especially when I switched target to try to kill the Captain leading the Guard of the Fountain Court. For the whole of the rest of the battle my bowmen only got one more kill, which was a Guard of the Fountain Court. At the same time his Rangers managed to kill my Mumakil Chieftain, leaving it with no Might. 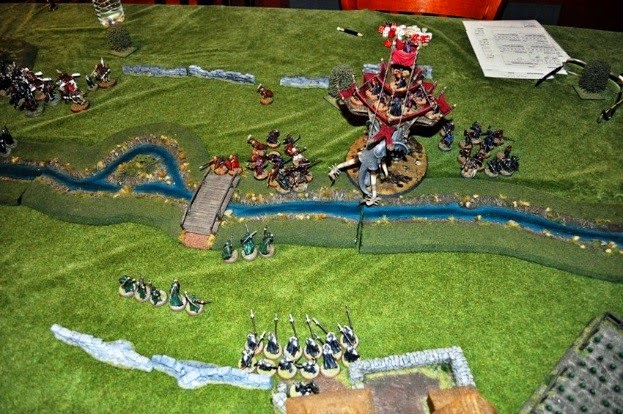 As I advanced on my left flank he withdrew behind his walls. My Haradrim Chieftain managed three heroic Marches with no Might loss due to the Taskmaster, which was very good for me. It meant I got into battle with the Rangers and Guards before King Elleasar could get to me. 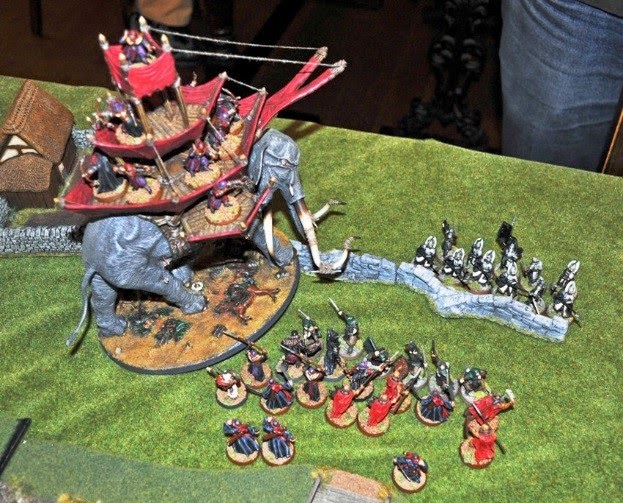 My lines hit his Rangers first, which slowed my advance down; it took three turn to finally fight through them. I realised it had been a mistake to switch bow fire from them to the Guards. By the time I got to the Guards of the Fountain Court King Ellesar was coming up behind me. He went on alone as I intercepted the remainder of his Knights and Citadel Guard with my Hasharin warband and some Watchers of Karna. His troops were slowly cut down and at the end were wiped out. 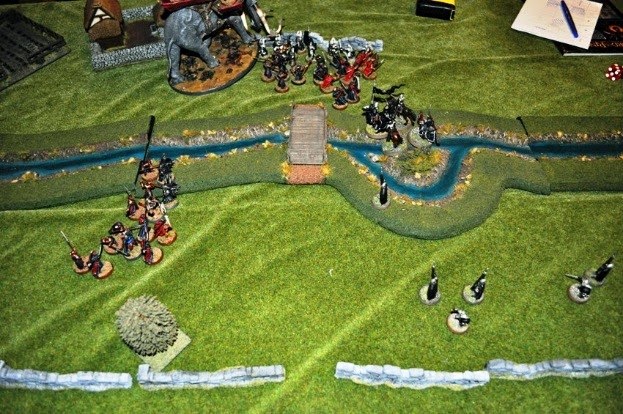 As my Mumakil had lost its Chieftain his Guard of the Fountain Court were able to Heroic Move and attack my Mumakil before I could trample them, in fact I did not get in a single trample the whole game. Over two turns they inflicted two wounds on the Mumakil, but by a miracle my Warrior now in the top of the Howdah managed to succeed both times on his courage check, throwing 8 and 11 respectively. By which time my Chieftain and Taskmaster were slowly taking down the Guard of the Fountain Court. The Taskmaster even managing to take one down with his whip!

However, then King Ellesar arrived and after being repelled by a shielding Mahud got around onto the Mumakil. 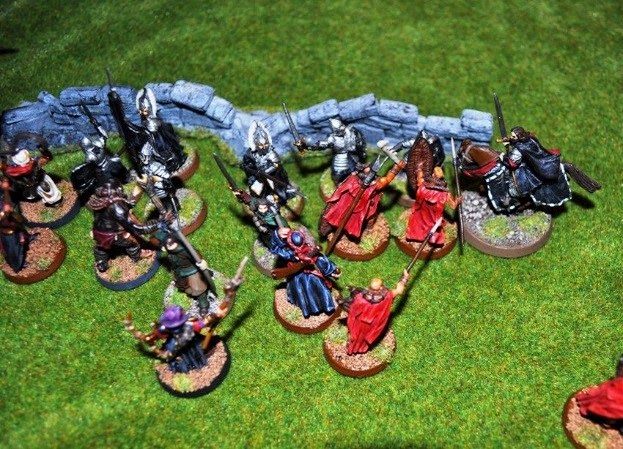 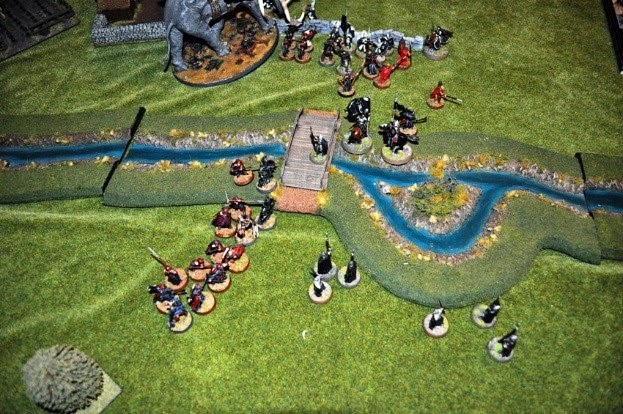 King Ellesar and some Guards wounded the Mumakil again and this time it failed its courage. James then turned it against me trampling some of my Haradrim Warriors, it was stopped when it only managed to wound my Taskmaster twice, and he saved a wound with his fate which saved at least five other of my troops. 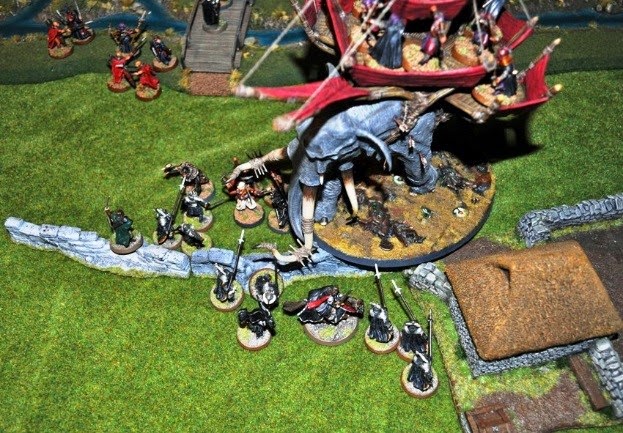 The Mumakil was now becoming a serious liability. Fortunately the rest of his force was mostly decimated and James decided to withdraw so that I could not get to kill King Ellesar. 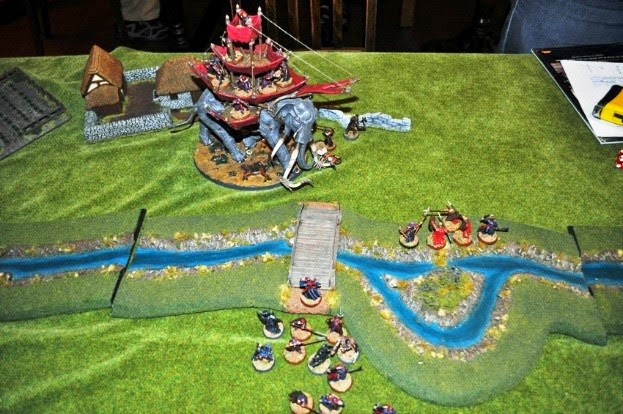 If I had it might have taken him out of the campaign as he would have had to go to the House of Healing and a bad roll could be serious.

So I held West Harondor, it was a good fight, very enjoyable for me, as had I lost then my Harad territories open up for him to attack into. Now my Harad forces march on.